Last year I had the pleasure of writing a piece for “Investigación y Ciencia”, the Spanish edition of Scientific American. Curiosities:

b)      A graphic designer improved all my pictures and created a fantastic layout for the paper.

c)       The editor read the whole article, made reasonable suggestions to improve the science communication and even wrote the abstract.

Now compare this with the experience of publishing in a scientific journal, where, in addition to writing and editing the paper yourself, they expect you to pay obscene prices on concepts such as “internet access to your own 5-page paper” and the ever-intriguing “publication costs” (Holy Molly, 3,700 euros!!! Did they hire scribe monks to write a special edition on human skin?).

In this first post after a long silence, I will talk about journals. I won’t speak about the usual suspects, though, but about all those Physics journals which I never touched in my previous letters. Don’t get me wrong: my attitude towards Nature, Science and PNAS hasn’t changed. However, very rarely we acknowledge that there are serious problems with all the other journals as well.

My teeth are ready to bite.

The people working for PR call themselves “editors”, just like the people who work for Scientific American. How do they dare? What do they edit, apart from the title (when it starts with “the” or “a”) and the acknowledgements (when they make too evident that the paper was written by a human)? The only time that I recall PR editing anything in any of my papers was when a PRA proof editor refused to let me finish a sentence with an exclamation mark, because “according to our editorial rules, the exclamation mark is reserved for the factorial”. Factorial[Your editorial rules suck].

True, they don’t edit anything, but that doesn’t mean that they don’t work. On the contrary, PR editors seem to spend a considerable amount of time carrying out the following activities:

1) They choose the referees.

The problem is, they’re not very good at this. Am I the only one who thinks that, in the last few years, publishing in PRL is like playing Russian roulette? Here are some common reviews:

“The paper must be accepted, because the authors do this, this and that”.

We do nothing of the sort, but thanks for accepting our paper.

“It is a very good paper, and I’m sure that it will attract the attention of the community in quantum information theory. However, I don’t see how this can be of interest for the general physics community”.

Please, name a single publication in this month’s issues of PRL that every physicist can understand and appreciate. Do they really exist, or is it like your criterion?

“In their PRL submission, the authors write a theorem. A theorem!”.

Argh! We broke the sacred PRL oath of not stating theorems, propositions or lemmas! Grand Editor, dispose of our bodies as you like. Break them, dismember them, burn them at the stake!

2) They decide which papers get an “editorial suggestion”.

Whenever I imagine the selection procedure, cephalopod fortune-tellers, counting rhymes and Uri Geller always come to mind. Because if we give credit to the official explanation, namely, that the editors read all the issue’s papers and carried a thorough choice, then we are much closer to the end of science than John Horgan ever dreamed. Seriously, wasn’t there anything better to highlight than this, this or this? What the hell were you thinking, PR editors?

3) They enforce a number of editorial rules written in two tablets of stone that PR keeps in an ark.

PR has editorial rules for everything. And when I say everything, I really mean everything. Just have a look at their policies for acknowledgments: they are at one step from writing your acknowledgments themselves. In addition: don’t write O(log(n)), but O(log_{10}(n))]; don’t use the word ‘new’; don’t dare call a 3-page PRA submission “letter”… The worst is when a proof editor asks you to “complete” a reference for which you already provided title, author, year, edition and publishing house. Sometimes I waste three hours of my time searching the damned city of the publisher, that no one in the world except PR cares about, and doesn’t even feature in the inside of the book. I wrote a 24-page paper, give me a break! Find the reference yourself and earn your salary, for goodness sake!

A total disaster. I give them seven stars out of ten.

Since a bunch of frustrated mathematicians took over the journal years ago, I doubt that a young Stephen Hawking could now publish there his ideas about particle creation in black holes. Only in CMP you’ll get reviews like: “this theorem is trivial, because the proof uses linear algebra”.

“The mission of Communications in Mathematical Physics is to offer a high forum for works which are motivated by the vision and the challenges of modern physics and which at the same time meet the highest mathematical standards.”

Most people would understand the last bit as “we demand mathematical rigor”. Unfortunately, many CMP editors interpret it as “the proof must be very long”. A CMP editor might retain your submission for several months before informing you that your proof is not long enough for CMP. Don't expect any apologies or explanations for the delay.

“That I owe you an apology? I don’t owe you anything, you miserable sub-mathematician! Now leave me alone: I’m trying to picture a ten-dimensional Calabi-Yau manifold… Mmm… yes! YES! Ooohhh, BABY! Feel my “four-momentum”! Shake those “regions of positive curvature”! Let's ride together to the event horizon!”.

Do you like showing off your mathematical erudition? Do you think that physicists are stupid because they don’t know category theory? Do you feel lost when there is not a list of "important problems in the field"? Then you’re an idio CMP is your journal!

Did you prove an important result in less than four pages? Do you hope to start a new research line? Did you motivate your research at the introduction of the paper? Then do yourself a favor and leave science consider another journal. 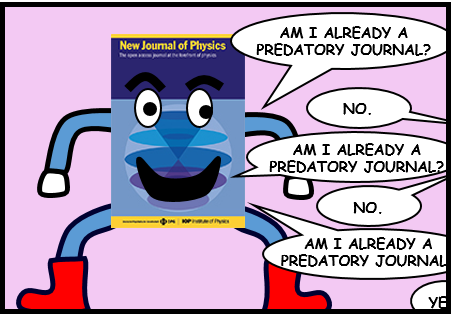 The name is misleading, because the journal is 10 years old. It used to be selective, but nowadays it will publish whatever crap as long as one pays the crazy publication fees (around 1,500 euros). Sometimes, the editors “invite you” to participate in a special issue, a privilege for which they charge you even more. The legend says: if you accept, ten editors from NJP will raid your home, tie you naked to a nearby street lamp and beat you on the back with old PRA issues while they call you “suckerlamper”. Because you're worth it.

Trivia: the worst paper I ever wrote was published there. It was rejected from PRA, and no wonder.

Better give your money to a charity. 7/10 stars.

Proceedings of the National Academy of Sciences

I know, I said that I wouldn’t mention high-impact journals. But seriously, something needs to be done: it is undeniably difficult to publish in PNAS any theoretical result in QI that is not related to Leggett-Garg inequalities. Almost everything other than that is either completely misunderstood or labeled as “relevant for quantum information science, but not for other fields” by an “anonymous editor”. To this, I ask:

a) are there many PNAS publications in, say, astrophysics, which are also important for fields other than astrophysics?

b) IQC, IQS, you have in the advisory board a 79 year old man who, not only has never published a single paper on QI, but also seems to hate the entire field. Why do you keep him? Is it just for the sex?

The best journal I’ve always been rejected from. 7/10 stars.

Those have been the problems. What are the solutions? My advice (for the moment) is: submit everything to Quantum. It’s a non-profit journal, so it won’t suck up your budget. Moreover, its editors are reasonable researchers. I doubt I’ll be writing about them in the future.

Schrödinger’s Rat
Posted by Unknown at 13:04